An installation consisting of an open upright piano with visible strings, mechanics and detached parts. The sculpture is prepared with an hidden electromagnetic system which moves its keys and vibrates its strings by following real-time environmental data.

A piano represents a massive element with a powerful yet subtle sound. Despite its solidity, it is very fragile and subject to the aging process caused by time and environmental conditions. The instrument used in this installation has not been maintained for many decades, it has become an unusable object abandoned to itself. It dramatically reveals its state of deterioration as soon as it starts playing. Its sounds are inharmonic, crackling and unpredictable. It is in a slow but continuous state of deterioration and transformation as is the melting ice of our planet.

Iceberg-1410 wants to be a representation of changes, absence of control, disharmony, abandonment. Carelessness. Destruction. Emergency. 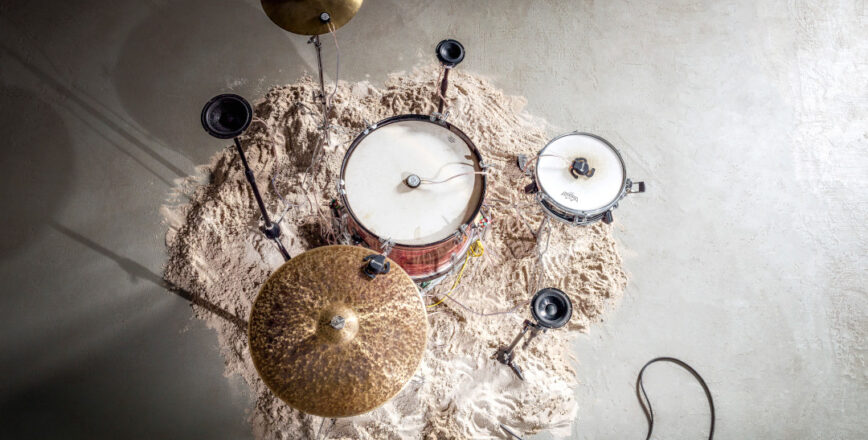 A drum set and several speakers compose a sort of sculpture/machine which comes out from sand. The sculpture generates electronic and percussive sounds distributed respectively in speakers and drum components by the use of special exciters. Each drum component acts like a speaker becoming a sound source itself.
The installation is a materialization of the performative project Sabbia Duo, an improvisation for percussion and live electronics in collaboration with drummer Vasco Furtado. Performers are here replaced by a sort of machine which uses sound material the duo recorded during a 4 days residency to create in real-time a new timeless and “suspended” improvisation. 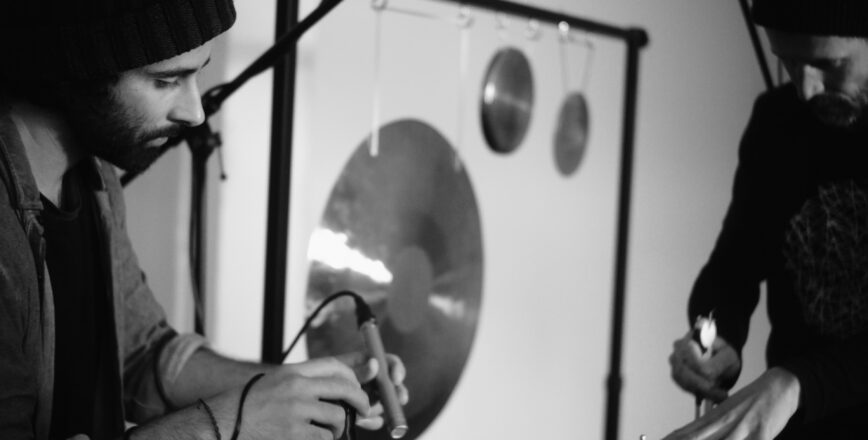 A collaboration between sound artist Alfredo Ardia and free jazz percussionist Vasco Furtado started in November 2020. Working with improvisation, the Cologne based duo focuses on the acoustic characteristics of prepared percussion, custom-made electronics and immersive sound diffusion. Drumhead textures and cymbals resonances become the main object of research and sonic exploration of the instrument. Electroacoustic processes extend these acoustic properties in time, space and spectrum. The result is an organic soundscape which alternates quiet and contemplative moments to dense textures inspired by transformations and movements of desert sand. The live performance is presented with an 8-channel audio system surrounding the audience. Sounds are diffused and spatialized in real-time creating an immersive listening experience.

Höömii, The Voice of Wind is the artistic result a field recording expedition to Mongolia where Alfredo Ardia investigated the relationship between the sounds of nature and the traditional
Mongolian throat singing style Höömii. His expedition included travels from Ulan Bator to the most remote places in the west of the country. Recordings were made of undisturbed natural soundscapes as well as of throat singers who explain, in Mongolian language, the connection between Höömii and the sounds of animals, rivers, mountains and wind. The original sound recordings have been used to compose the soundscape piece and presented in the sound installation. Höömii is a vocal tradition in which the human-nature relation is strongly audible.
It is the result of the nomadic and pastoral lifestyle still alive in Mongolia. While herding animals alone in the steppe, nomads would throat sing to communicate with animals, make homage to the natural spirits or to communicate with each others through large distances. Master N. Tserendavaa says that Höömii has been inspired by listening to the deep sound wind blowing between mountains. And that the mimicry of natural sounds of rivers or the voice of animals are at the base of this vocal art. Using his voice, he demonstrates how to throat-singing beginning from the imitation of camels voice. Throat singer D. Sengedorj shows how monks used this vocal technique while reciting Tibetan Sutra texts. He explain that Höömii is about understanding nature and be in contact with it. It is about listening to the natural environmental sounds and not only about learning vocal techniques. Talking with nostalgia, he pictures the calm land where he grew up and tells how development is changing it.

“There was no television, no radio
and just few cars a month passing by.
I could only hear animals and human voices.
Nature was pure, so calm and beautiful.
It was authentic: nobody was disturbing it.
That is why I learned Höömii.” 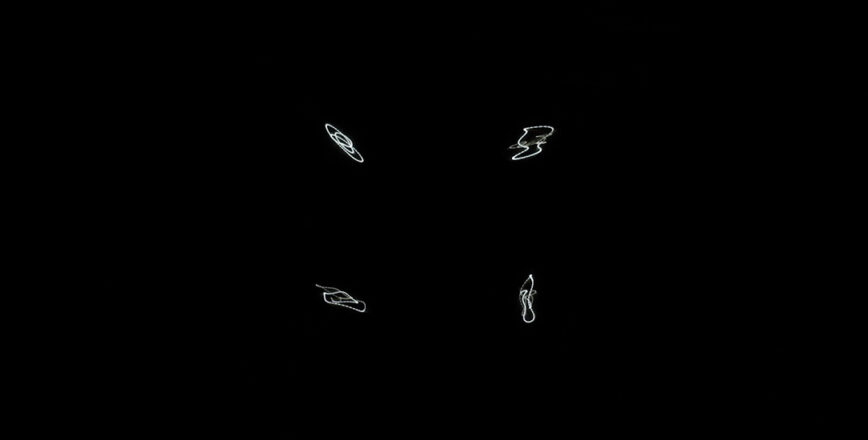 Metamorfosi is an installation which focuses on the behavior of resonant frequency, sound interferences and its visualization. The sound material is based on a generation of harmonic sine waves tuned with the sizes of the room to create a resonant field in the space, giving the impression that the sound is coming from the room rather then the object itself. The superposition of these compound tones produces beats phenomena, resulting in a sound field characterized by dynamic movements within the sound itself. Sound is accompanied by its direct visual translation through the use of a self-made analog device placed on the top of the object. The visualization results in Lissajous figures which slowly transform during the time following sound’s dynamics. 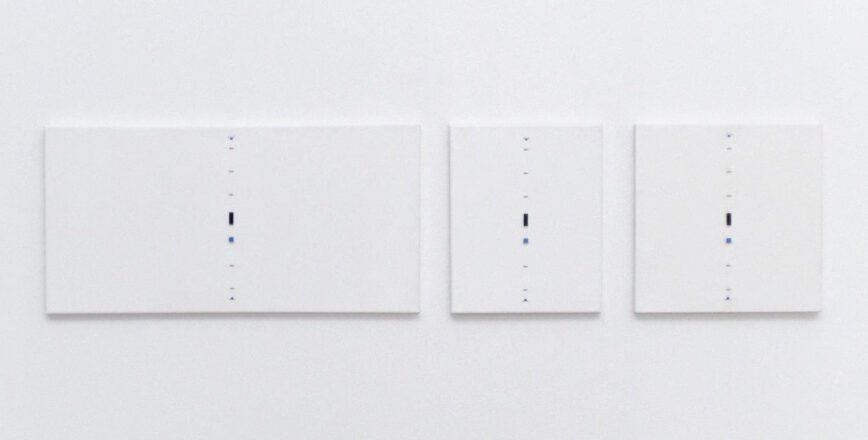 Study about asynchronous acoustic pulse patterns and material reaction to sound pressure. Three pulse-generator circuits are disposed in vertical distribution on frames to represent the pulse in the time domain. The circuits generate periodic pulses at different frequencies, creating irregular patterns through an asynchronous overlapping of regular pattern layers. The frame is the material through which sound is diffused, its dimension change the pulse timbres. The length of the frame is directly proportional to the pulsation frequencies, it’s a representation of the time domain. 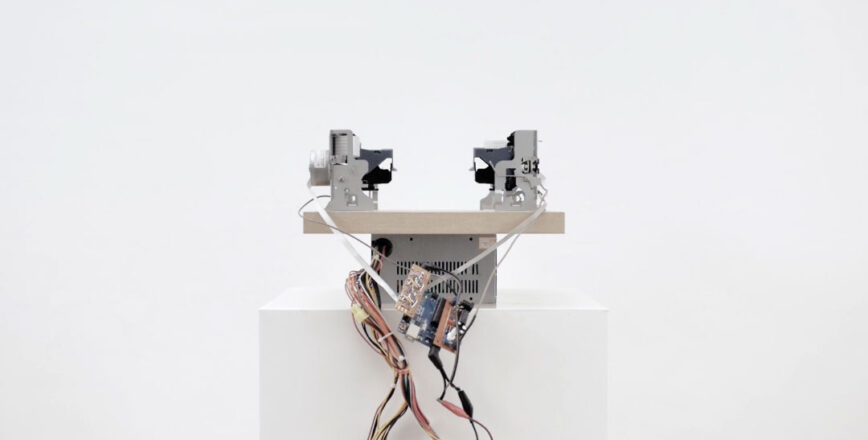 In collaboration with Sandro L’Abbate
Encefalo, from the Greek enképhalos “within the head”, is inspired by the brain’s anatomy and its own dichotomy. 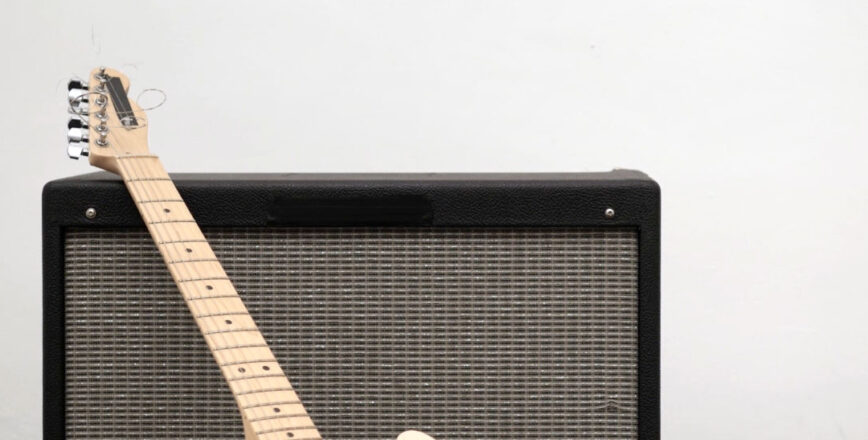 A guitar lies on an amplifier. The amplifier, because of its self-noise and pickup’s proximity, vibrates imperceptibly, spreading its motion to the guitar’s body through the contact point. Wood resonates. Because of a prepared tuning, strings vibrate and interact causing a low frequency beat which develops during the time, and is influenced by feedback unpredictability and the acoustic of the space. 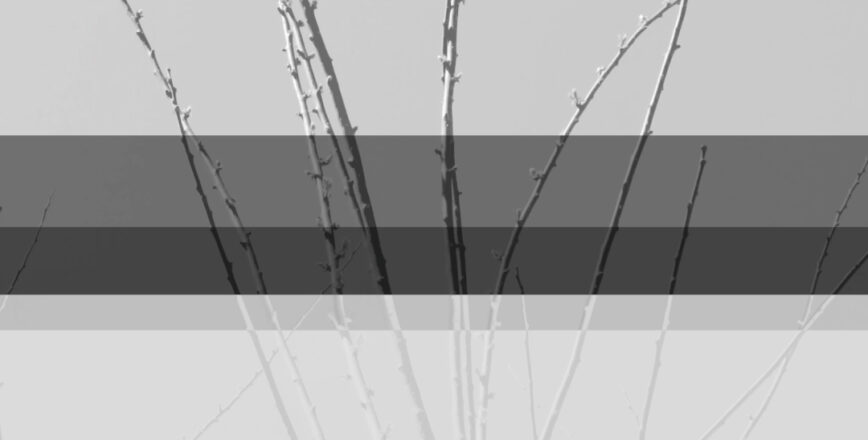 The idea behind Rami came during a study about beats phenomenon: an acoustic interference, produced by two or more sine waves with slightly different frequency, which results in a periodic amplitude modulation.

Looking at a naked tree I imagined it as a score where a set of frequency moving near and away, crossing each others, following the branch’s shape and creating complex beats patterns. In Rami the sound is created by a sonification process of shape and movements of the tree showed in the video component. 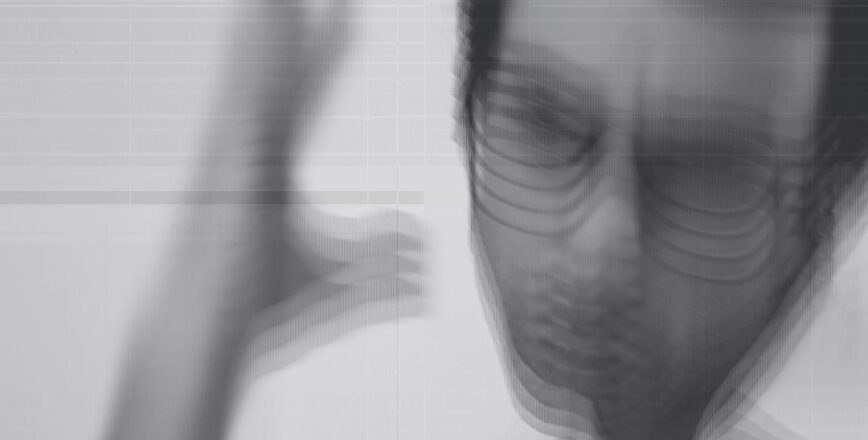 A disoriented individual becomes aware in a new perceptual space, interacts with it, analyzes it with precision and takes notes about it. But like any computer program, it is a system where the defect, bug, disruption and any kind of interference, leads to a fragmented pace of the narrative itself.

The composition, in collaboration with Sandro L’Abbate, is made with the intention of creating a relation between what we see and what we hear, a studio about the connection of these processes. The sound material (sinewaves and glitches) apparently simple and minimalistic, have complex internal interactions, through beats phenomenon, linked to the dynamics of the video.

Create a website and earn with Altervista - Disclaimer - Report Abuse